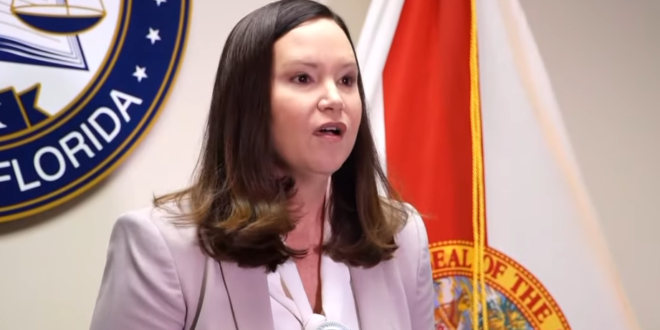 11 GOP AGs Side With Trump On Mar-A-Lago Search

Florida Attorney General Ashley Moody [photo], who has been endorsed for a second term by Donald Trump, is now jumping into the legal battle over the materials seized by the FBI from the former president’s Mar-a-Lago estate.

Moody — a Republican, former prosecutor and judge and the state’s top legal officer — on Tuesday joined with 10 other Republican attorneys general in filing a short legal brief in the 11th Circuit Court of Appeals over what they called the “ransacking” of Trump’s Florida home.

This amicus brief, which appears to have been organized by Texas Attorney General Ken Paxton, suggested in essence that Justice Department lawyers representing the FBI can’t be trusted because of the Biden administration’s track record on other matters, including immigration and Covid-19.

The attorneys general from Texas, Florida, Indiana, Kentucky, Mississippi, Missouri, Montana, Louisiana, South Carolina, Utah and West Virginia do not elaborate on the core legal issues Trump is contesting — executive privilege and whether the documents found at his Florida estate were actually classified — according to John Yoo, a legal expert on executive privilege who reviewed the brief at The Washington Post’s request.

Instead, the GOP officials list a wide array of grievances against the Biden administration, including how it handled immigration law enforcement and its response to the coronavirus pandemic, that do not appear directly related to the case. They argue that the administration’s “questionable conduct” in policymaking and litigation means courts should treat the Justice Department’s appeal with caution.

It’s like these people absolutely do not care about the law at all when it comes to their fellow Republicans https://t.co/p9wnjsnT30