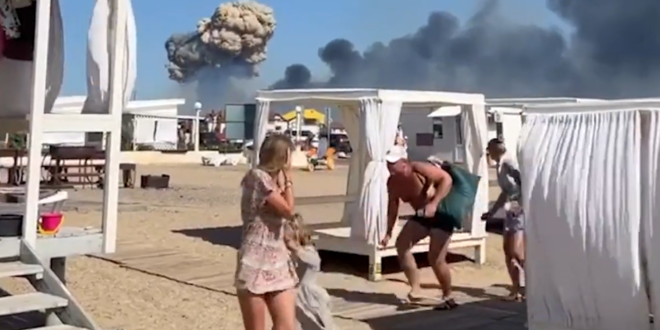 Ukraine’s defense ministry published a video Thursday mocking Russian tourists who fled Crimea after huge explosions ripped through an airbase on the occupied peninsula this week.

Footage shared on social media earlier this week showed beachgoers running for cover after the blasts at the Saki base, an attack that has been credited to Ukrainian special forces.

Although Kyiv authorities are yet to formally take responsibility for the attack, the defense ministry’s trolling video mocked the Kremlin’s account of what caused the explosions.

Unless they want an unpleasantly hot summer break, we advise our valued russian guests not to visit Ukrainian Crimea.

Because no amount of sunscreen will protect them from the hazardous effects of smoking in unauthorised areas.
🎶Bananarama pic.twitter.com/NnWnpZqMhR

Previous MPX Vax Maker Concerned About Plan To Split Doses
Next Beto O’Rouke Calls Out Uvalde Heckler At TX Town Hall: “It May Be Funny To You, Motherfucker, But Not To Me”