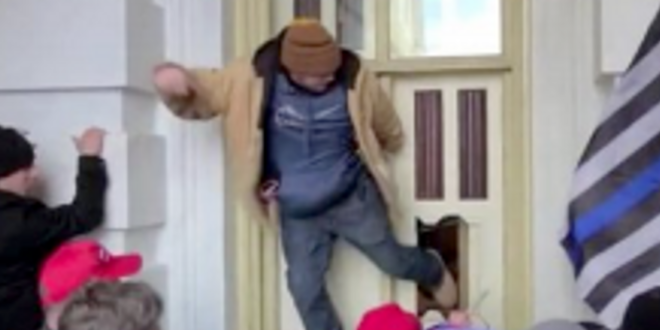 An Ohio man pleaded guilty today to a felony charge of destruction of government property for his actions during the breach of the U.S. Capitol on Jan. 6, 2021.

His actions and the actions of others disrupted a joint session of the U.S. Congress convened to ascertain and count the electoral votes related to the presidential election.

Troy Elbert Faulkner, 41, of Whitehall, Ohio, pleaded guilty in the District of Columbia.

According to court documents, shortly after 2:30 p.m. on Jan. 6, 2021, Faulkner was part of a large crowd illegally outside the U.S. Capitol. He jumped up onto a window ledge and used his left foot to kick in two lower panes, shattering them.

On Jan. 13, 2021, on a recorded call to an FBI hotline, and in subsequent interviews with law enforcement officers, Faulkner admitted that he had kicked in the window.

The Architect of the Capitol estimated the cost of the damage to the window is $10,560, making this a felony offense.

He faces a statutory maximum of 10 years in prison and potential financial penalties. A federal district court judge will determine any sentence after considering the U.S. Sentencing Guidelines and other statutory factors.

Here in Ohio we don’t necessarily have the brightest extremists.https://t.co/2plLRuyHTm