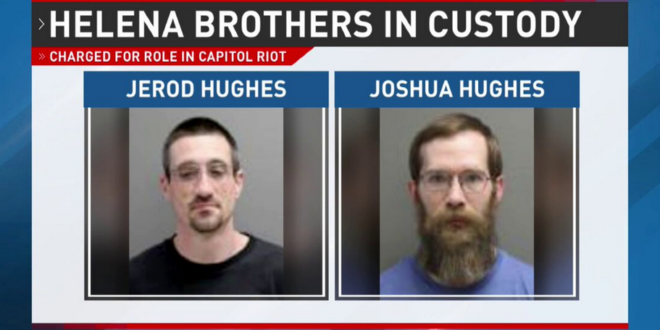 Two Montana brothers whom the FBI has said were among the first people to break into the U.S. Capitol while Congress was certifying the 2020 Electoral College vote have reached agreements calling for them to plead guilty to obstruction of an official proceeding.

Jerod and Joshua Hughes climbed through a broken window and Jerod Hughes helped kick open a door to allow other rioters inside, the FBI said in charging documents.

The brothers were right behind the primary aggressor who pursued Capitol Police Officer Eugene Goodman up the stairs, investigators said. Goodman was able to bait the mob away from the Senate floor, which had not yet been evacuated.

Read the full article. They face up to four years in prison.

They were captured on the viral video showing Capitol Police officer Eugene Goodman leading the mob away from the Senate chamber pic.twitter.com/AhGjpvs7jQ

This photo from Joshua Hughes’ FB account from Berkeley Calif in April 2017 shows Hughes–charged last night in the Capitol riot–w/Kyle Chapman, aka Based Stickman, founder of the Fraternal Order of the Alt-Knights, the former military wing of the Proud Boys. pic.twitter.com/dEFi7Csx40

Update: Jerod and Joshua Hughes of Helena initial court appearance was in Great Falls at 11 a.m. on charges related to Capitol riots, during which prosecutors say they were part of Officer Goodman encounter and made way to Senate floor. More info on what’s next tonight. #mtnews pic.twitter.com/9jp60EUL7d