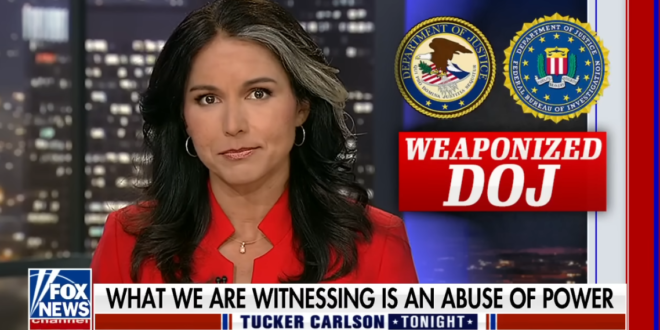 Tulsi Gabbard filled in as guest host for Tucker Carlson on Fox News and across two segments warned about the “weaponization” of law enforcement in the United States, as well as the “hallmarks of dictatorship” she said are apparent under President Joe Biden‘s administration.

“The FBI’s raid on Mar-A-Lago was a major escalation of the weaponization of the security state on the American public,” said Gabbard on Friday. “It’s about to get much worse because right here before the midterms, we are seeing these entities being politicized and weaponized.”

“The security state will label you an extremist for daring to challenge or disagree with the regime’s weaponization of law enforcement,” said Gabbard.