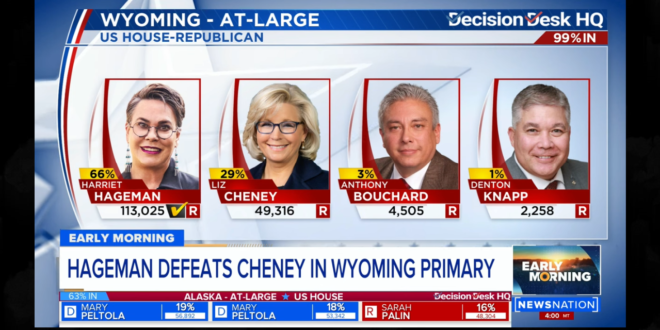 Wyoming Republican Rep. Liz Cheney conceded defeat in the primary election for her House seat on Tuesday following months of her withering criticism of former President Donald Trump and his efforts to subvert the 2020 election. “This primary election is over, but now the real work begins,” Cheney said, nodding to future political plans to take on Trump. Cheney noted that she had called opponent Harriet Hageman to congratulate her.

“Our nation is barreling once again toward crisis, lawlessness and violence,” Cheney said. “No American should support election deniers for any position of genuine responsibility.” Hageman argued that Cheney was out of step with the state. “By our vote today, Wyoming has put the elites on notice: We are no longer going to tolerate representatives who don’t represent us,” Hageman said in her victory speech.

A clear message is being sent about what the Republican Party needs to be.

Bye bye @Liz_Cheney. On the bright side at least you won’t have to pretend to be from Wyoming anymore.
pic.twitter.com/DMcj3ua42d

Breathtakingly arrogant speech by loser Liz Cheney. Orchestrating show trials contrary to safeguards guaranteed by the Bill of Rights is not Lincolnesque. On the contrary, Cheney’s actions mirror precisely the authoritarianism our founders fought valiantly against.

Few people in Washington have been as wrong and damaging on foreign policy as Liz Cheney. Congratulations to @HagemanforWY on her victory tonight. I look forward to working with an advocate for liberty as the next Congresswoman from Wyoming. Bye Liz.