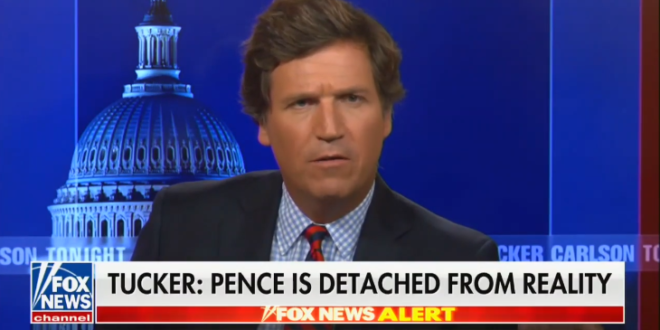 “I mean, Mike Pence is a very nice guy, seems like a nice guy, but he spent four years getting bossed around by Donald Trump like a concubine, as he was bossed around by his donors when he was governor of Indiana. He’s not in a position to lead anything.”

“I think he probably has useful years left in him, and I think he is probably something to add, perhaps probably grandchildren, too. But the idea that he’s going to run for president is, like, delusional, and it’s clearly only benefiting his consultants.

“And he should fire anyone telling him to go to New Hampshire and run for president, give dumb speeches about the FBI when he has no idea what he’s talking about.” – Tucker Carlson, last night.

Breaking News: Mike Pence called on Republicans to stop attacking the nation’s top law enforcement agencies over the FBI’s search of Donald Trump’s home. Pence also said he would consider talking to the Jan. 6 committee if he were “summoned to testify.” https://t.co/a4Xc4DlIgE

Tucker: Mike Pence seems like a nice guy but he spent four years getting bossed around by Donald Trump like a concubine.. pic.twitter.com/Ocib1PMmma