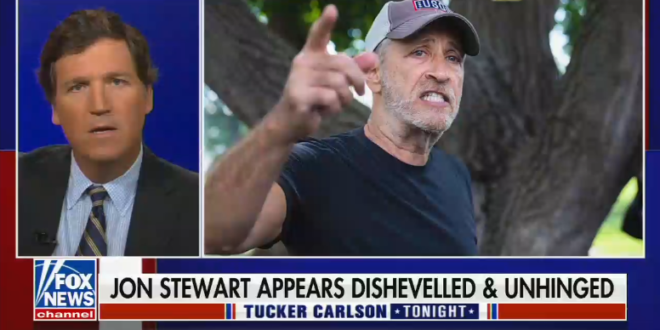 He has resurfaced. He showed up in Washington, D.C. the other day, looking like a guy who lives in the men’s room at your public library, eating imaginary insects out of the air.

And he was there to get, for some reason, into a shouting match with the senior editor of Human Events called Jack Posobiec.

It was all on tape. You should watch this. What’s really the most interesting part of it is not the policy debate, but Jon Stewart himself, he’s totally unrecognizable. He looks demented.

Was he always that short? What happened? Where’s he been the last seven years? If you know, let us know. We want answers.

About the guy Stewart shouted at:

Jack Posobiec, the notorious pro-Trump internet troll who made a name for himself pushing the Pizzagate conspiracy theory, has been hired by Turning Point USA, the conservative youth group run by Charlie Kirk.

Posobiec rocketed to social media fame as a relentless proponent of Pizzagate, a bizarre theory that claimed Hillary Clinton and her allies ran a child sex-trafficking ring out of D.C.’s Comet Ping Pong.

He also worked on Donald Trump’s 2016 campaign. After Trump was elected president, Posobiec attended a protest with a sign that read “RAPE MELANIA” in an effort to smear the protestors.

In 2020, Posobiec appeared on JMG when he claimed that Black Lives Matter activists had placed pipe bombs on the National Mall, a claim DC police said was false. The following month the SPLC published a lengthy report linking Posobiec to white supremacist groups and neo-Nazis. He first gained national headlines when he and loony Laura Loomer disrupted a Shakespeare play in Central Park.