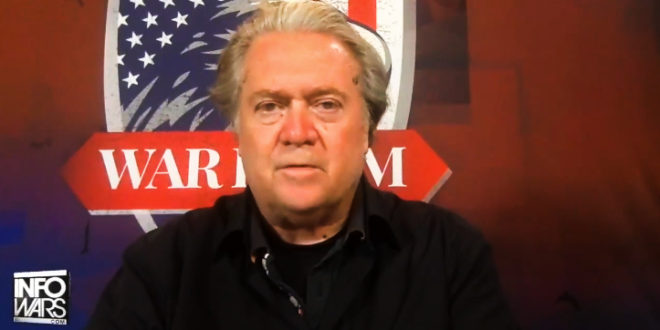 Former Trump strategist Steve Bannon went fully conspiratorial with Alex Jones by claiming the FBI raid on Mar-a-Lago was part of a “deep state” plot to have Donald Trump assassinated or found with incriminating evidence.

“I do not think it’s beyond this administrative state and their deep state apparatus to actually try to work on the assassination of President Trump,” Bannon said.

“Everything’s on the table. I think his security should be at the highest it’s ever been, and honestly I think he should have flown down to Mar-A-Lago this morning, walked out at noon today, and said ‘Hey, I’m running for President of the United States. Suck on that.’”

Read the full article. Bannon went on to claim that the FBI “planted evidence” during their search.

After a long time coming, Steve Bannon appears with Alex Jones on Infowars

Bannon suggests the “deep state” is working on assassinating Trump and claims the FBI planted materials at Mar-a-Lago pic.twitter.com/e1jueeZr1K

The Civil War rhetoric is through the roof

Previous Gingrich: The FBI Has “Declared War” On Americans
Next Pentagon: 80,000 Russian Troops Killed Or Wounded