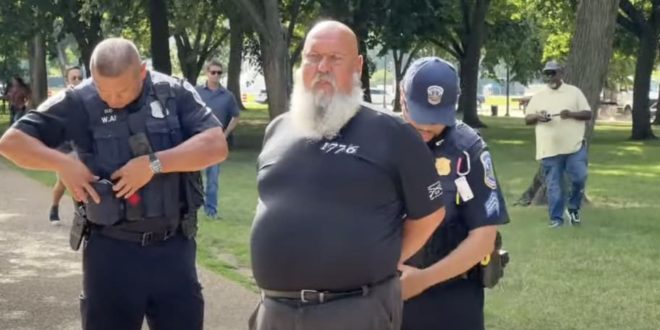 The leader of the right-wing and COVID anti-vax 1776 Restoration Movement—formerly called The People’s Convoy—was arrested near the National Mall on Wednesday after his group came to town protesting non-existent mandates. Far-right Proud Boy member and leader David “Santa” Riddell was taken into custody for a warrant out of Maryland, D.C., Metropolitan Police officers told The Daily Beast on scene.

The far-right People’s Convoy annoyed DC drivers earlier this year, accomplished nothing, drove out west, returned, accomplished nothing yet again, then declared victory and said it was time to vamoose. On Wednesday morning several former convoyers set up camp on the Mall, parking their flag-festooned vehicles and then sitting around in lawn chairs to achieve…well, that part has never been clear.

Watch these racist clowns in the video below.

During a morning protest near the National Mall, @DCPoliceDept arrested David Riddell, leader of the trucker convoy called the 1776 Restoration Movement.

1776 consists of members of the disbanded People’s Convoy which regrouped in May with fewer members & money in West Virginia. pic.twitter.com/IYDpQfFocl