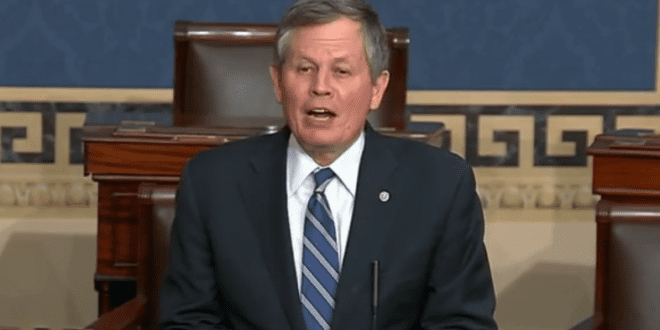 GOP Sen. Steve Daines: I’m A “No” On The Marriage Bill

Sen. Steve Daines (R-Mont.) on Monday announced he is opposed to federal legislation that would protect the right to same-sex marriage, joining Sen. Marco Rubio (R-Fla.) in speaking out against a bill passed by the House last week.

Daines, the junior senator for Montana, said in a statement he believes “marriage is between a man and a woman” and the push to pass the Respect for Marriage Act is a ploy from Democrats and Speaker Nancy Pelosi.

“I’m opposed to this bill and believe it’s another attempt by Speaker Pelosi and the Democrats to distract the American people from the inflation crisis, energy crisis and the southern border crisis they’ve created,” Daines said.

Daines last appeared on JMG when he wondered “why we protect sea turtle eggs under the law but not human baby eggs.”

In May 2022, he was among five GOP Senators who authored a letter demanding that the FCC create a method for parents to block television shows that feature LGBTQ characters.

Last year, Daines lamented that Montana’s homemade meth industry has been taken over by Mexican cartels.

Really important for reporters to point out that this bill does not only protect same-sex marriage, but interracial marriage as well (which Senator Daines colleague Mike Braun recently called into question!) https://t.co/3h7XHPtOT0