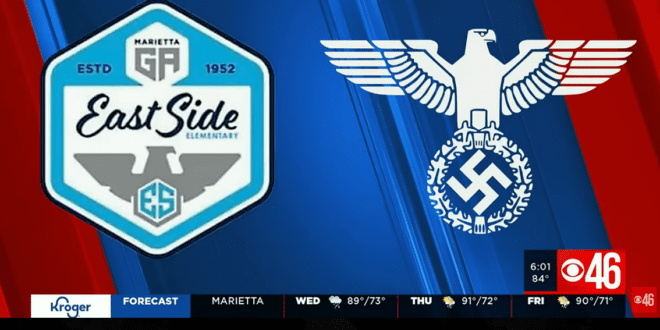 The Cobb County School District said Tuesday it’s halted the rollout of a new logo for an elementary school after parents pointed out similarities to Nazi iconography.

The logo for East Side Elementary in Marietta depicted an eagle, the school’s mascot, over the initials ES. The Nazi eagle, which was developed in the 1920s and later became a symbol for white supremacists worldwide, depicts an eagle holding a swastika in its talons.

The school is across the street from a synagogue.

Oy. Vey.
For those outside of metro Atlanta, east Cobb County is where tens of thousands of Jewish Atlantans live & home to some of the finest schools in the region. Unfortunately, this is only the latest incident related to antisemitism in Cobb schools. https://t.co/edmxw8u2zj

You have to wonder: Who came up with this logo? By what process was it reviewed? Even if someone didn’t know what the eagle itself represented, wouldn’t the swastika-looking ES be a tip-off? https://t.co/lZGwllr2T3