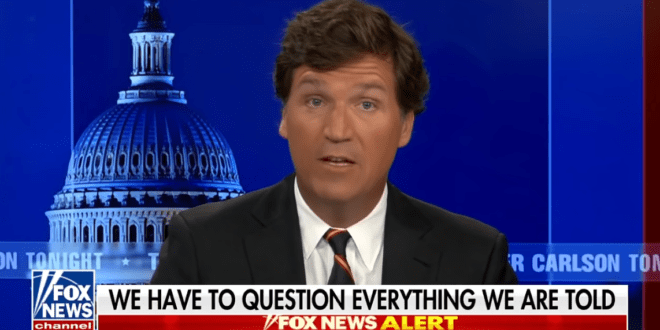 In 42 minutes of meandering remarks with frequent tangents to attack his favorite targets and punctuated with his trademark cackle, Carlson did not suggest he would seek the White House but did tell the conservative Christian audience what to avoid when settling on a GOP nominee.

“You need to be really wary of candidates who care what The New York Times thinks,” he told the 1,800 seated before him.

After attacking the environmentalist movement for its supposed hypocrisy, Carlson indulged in a riff on the nature of beauty, a bizarre but telling tangent.

To Carlson and the other speakers and attendees here, God’s order has no room for LGBTQ people – and especially trans people. They simply cannot exist if society is to be beautiful. “The Republican Party should be about nature in human relationships” the Fox host thundered, pivoting off his rant about how wind turbines are, to him, similarly against nature.

The Iowa convention was sponsored by the Family Leader, an anti-LGBTQ hate group that appeared on JMG many times during the battle for same-sex marriage.

In 2009 when Iowa became the third state to legalize same-sex marriage, Family Leader led the successful campaign to remove the three state Supreme Court justices who voted for it.

In 2011, Family Leader president Bob Vander Plaats was accused of selling his presidential endorsement to Rick Santorum in return for a $1 million donation.

The deal was reportedly organized by Brian Brown’s National Organization For Marriage. The Federal Elections Commission cleared Vander Plaats in 2015.

During the 2012 presidential race they demanded that all candidates sign an anti-marriage pledge. First to sign was Michele Bachmann.