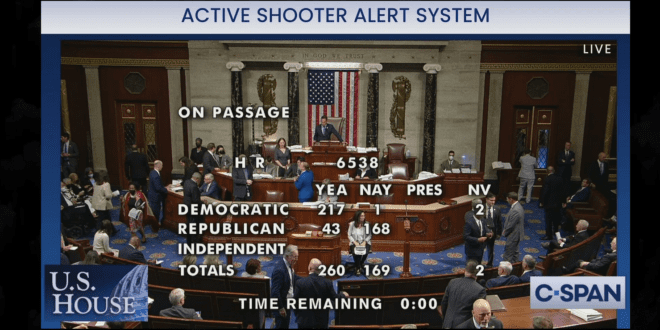 The US House passed bipartisan legislation on Wednesday night that would help state and local governments set up a warning system for active shooter situations, and enhance law enforcement’s communication with the public in such emergencies.

It would be similar in operation to the Amber Alert system that’s deployed whenever a child is abducted.

The legislation, approved by a vote of 260-169, was originally introduced in February, gained new urgency following the deadly mass shootings in Buffalo, New York; Uvalde, Texas; and Highland Park, Illinois.

The House just passed the Active Shooter Alert Act, my bipartisan bill with @RepFredUpton to give local law enforcement access to an AMBER Alert-like system to warn their communities during active shooter emergencies.

I’m urging the Senate to send it to @POTUS immediately. pic.twitter.com/Ll5CS3Z2Ld

Wisconsin U.S. Rep. Ron Kind was the only Democrat to vote against the Active Shooter Alert Act Wednesday evening.