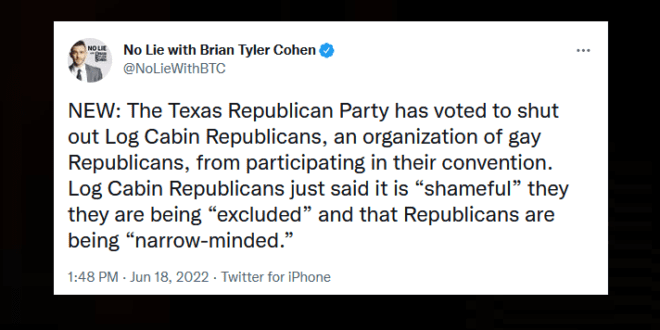 The Log Cabin Republicans, an organization of gay conservative activists, have been denied a booth at the Texas GOP convention, which runs June 16-18. The decision was apparently a close 4-3 vote of the Texas State Republican Executive Committee.

The Log Cabin Republicans said the Texas convention should allow the organization to host a booth in the name of the Republican Party’s growing “inclusion,” citing the victory of Mexican-American conservative Mayra Flores in this week’s special election in the state’s 34th congressional district.

“The Texas GOP should focus its energy on fighting back against the radical democrats and weak RINOs…instead of canceling a group of gay conservatives who are standing in the breach with us.” https://t.co/2k4ugSxnAl

The @TexasGOP has long opposed gay marriage, but its 2022 proposed platform has new language to describe homosexuality:

“Homosexuality is an abnormal lifestyle choice.”

“Every two years, for at least twenty years, the Log Cabin Republicans of Texas have had their application to place a booth at the state GOP convention invariably denied.” https://t.co/mBYnAeyvus pic.twitter.com/lGv5NWWKpt

This is the type of bullshit that makes gay Republicans look bad and deters Walk Aways and other gays from fully embracing the GOP@TexasGOP does NOT reflect the sentiments of the party at large, and they’re actions are disgracefulhttps://t.co/IOf1n0wnLq

Previous Hillary: US “On The Precipice” Of End Of Democracy
Next Court: Texas AG Can’t Intervene In Transgender Suit