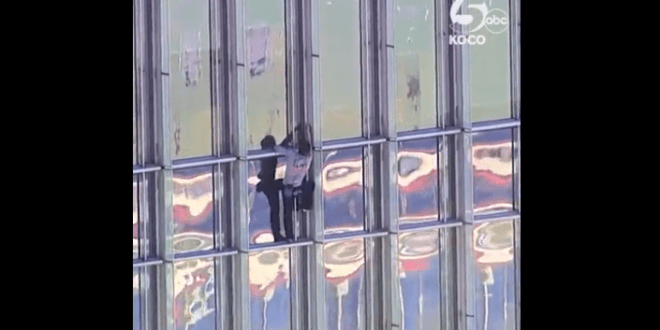 The person who climbed the 50-story tower posted stories to his Instagram account during the situation. The account identified him as Maison Des Champs, and his page describes himself as the “Pro-Life Spider-Man.”

The posts say they climb buildings to raise awareness for pro-life issues. A drone followed him up, and police said officers took the drone operator into custody.

As you can see in the final clip below, last month he pulled the same stunt at San Francisco’s Salesforce tower. The clip before that is from his GoPro camera today.

Individual is in custody at top of building. pic.twitter.com/PJbf3suBQT

Great teamwork today by all of our first responder partners who helped with the climber at Devon Tower.

Maison Des Champs was arrested at the top of the building after scaling it. He will be booked on complaints of trespassing and disorderly conduct. pic.twitter.com/v1TNJ8oGnl