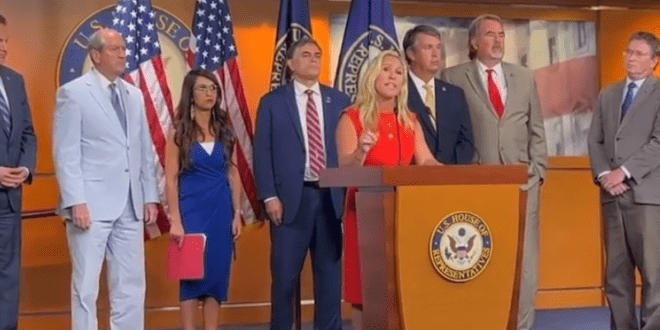 MTG: Unseat All Republicans Who Back Gun Reform Bill

“These are Republican senators that Republican voters do not support any more. We’ve got to change our Republican Party and needs to happen right here. Because if we don’t start defending Americans’ freedoms and rights and putting America first, our Republican voters are not going to want to put us in charge.” – Marjorie Taylor Greene, after reading the names of the 14 GOP Senators who last night voted to advance the bipartisan gun reform package. Standing with MTG were Lauren Boebert, Paul Gosar, Thomas Massie, and other extremist Freedom Caucus members.

With members of the House ‘Freedom Caucus’ looking on, Marge Greene calls on the 14 Republican Senators who voted for the gun bill to be voted out of office. pic.twitter.com/P9Tkkv9kBW