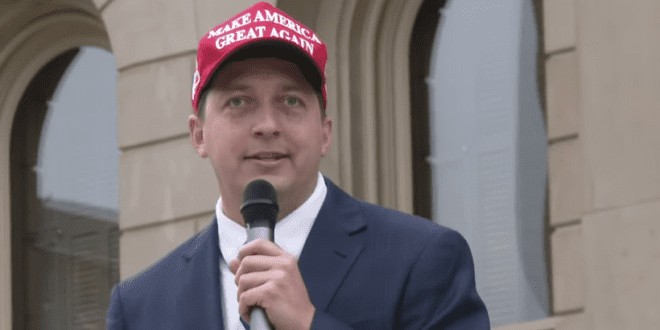 A handful of House Republican lawmakers want to create lengthy new prison sentences for Michigan abortion providers and those creating or distributing abortion-inducing medication, filing legislation Wednesday in anticipation of the U.S. Supreme Court erasing federal abortion rights as soon as this week.

The measure, led by state Rep. Steve Carra, R-Three Rivers, clarifies the person seeking the abortion could not be prosecuted and specifically indicates contraceptives like Plan B would be allowed.

But it creates a 10-year prison sentence for doctors performing any abortion deemed illegal, and a 20-year sentence for anyone manufacturing, selling or distributing medications intended to induce abortions.

Carra appeared on JMG yesterday when he introduced a resolution to create an annual “Remembrance Day” to honor the Capitol rioters.

This is the absolute batshit craziness that will become our reality if @GovWhitmer were to lose to one of her radical potential opponents in November. To my fellow physicians, they’re coming after you. https://t.co/wkc5ywUtsW

Previous Hannity Vows To Vape On-Air If FDA Bans His Beloved Juul Brand: “They Can Come And Arrest Me” [VIDEO]
Next Quislings To Leopards: How Dare You Eat Our Faces!