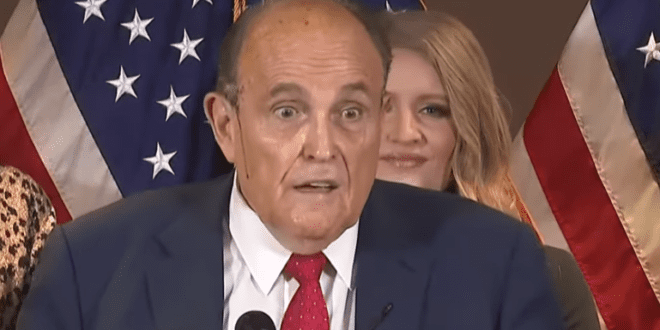 GOP Official: Giuliani Admitted He Had “No Evidence”

In emotional testimony, Bowers testified that Giuliani asked him to replace Arizona’s electors from Joe Biden’s victory with illegitimate pro-Trump electors and that the suggestion offended him to the core.

“It’s a tenet of my faith that the Constitution is divinely inspired — of my most basic, foundational beliefs,” Bowers said. “And so for me to do that because someone asked me to is foreign to my very being. I will not do it.”

As Bowers recalls it, Giuliani said: “We’ve got lots of theories; we just don’t have the evidence.” Bowers said that he did not know whether it was a “gaffe” or if Giuliani just didn’t think it through, but he said he and other witnesses in his group recalled that comment.

Developing story, as the Jan. 6 Committee steadily chips away at the question of knowledge, @LawCrimeNews https://t.co/Vcc3WGOl8U

Bowers testifies that he repeatedly asked Rudy GIuliani to provide evidence to back up his claims that thousands of dead people and undocumented people voted in Arizona, but he never provided it pic.twitter.com/kNmTPWQ6W3

Arizona House Speaker Rusty Bowers (R) testifies that Rudy Giuliani told him, “We have lots of theories we just don’t have the evidence” of election fraud.

“I don’t know if that was a gaffe … Afterwards we kinda laughed about it.” pic.twitter.com/Aub4GVX44d