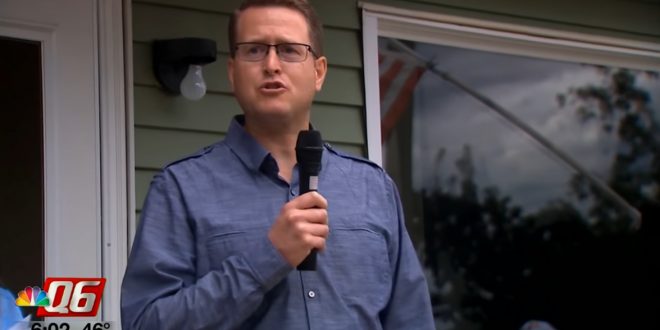 A pastor from the far-right church led by former state Rep. Matt Shea denounced the recent actions of the hate group Patriot Front during an anti-abortion worship service at the clock tower in Riverfront Park on Saturday. About 100 people gathered for the event on the cold morning.

On Fire Ministries Pastor Gabe Blomgren strongly condemned Patriot Front, whose members were arrested by law enforcement last weekend while seemingly en route to antagonize the city’s annual Pride in the Park event.  Shea was also in Coeur d’Alene that day to lead an alternative “prayer walk” in opposition to the Pride event.

Earlier this week Shea declared that Patriot Front is a secret operation by Antifa.

Shea appeared on JMG in March 2022 when he was involved in a suspicious attempt to “rescue” Ukrainian children.

He first earned national headlines in 2019 when leaked chats showed his violent fantasies about executing non-Christians and when it was learned that he had participated in militia drills to train young men for “biblical warfare.”

Shea advocates for the creation of a 51st US state based on “biblical law.” He has also said that all American men who fail to avow allegiance to Jesus should be executed.

He was expelled by the Washington state Republican caucus but refused to resign even after the feds found that he had “participated in an act of domestic terrorism against the United States” by helping plan the armed takeover of the Malheur Wildlife Refuge in Oregon in 2016.

He did not seek reelection in 2020 and is now the pastor of Covenant Christian Church in Spokane.

“The organization Patriot Front has nothing to say about the lord Jesus Christ – not one exalting word in their garbage manifestos, which frankly make me sick,” one pastor said of the group during today’s gathering in Riverfront Park. https://t.co/6RuS0AJwNF