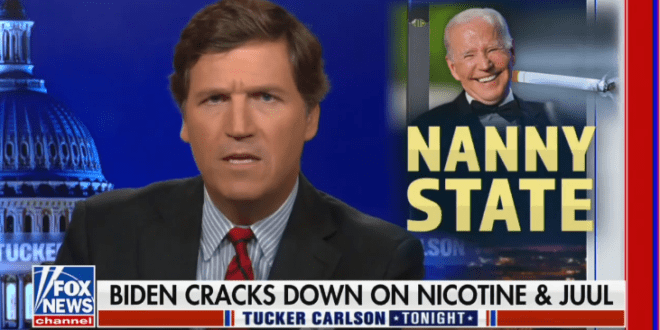 Yesterday the FDA announced it’s planning to remove virtually all nicotine from cigarettes. Now nicotine is not the thing that gives you cancer. Nicotine is the thing — it’s addictive but it also increases mental acuity but they’re taking that out.

According to the Wall Street Journal, the agency will also ban Juul e-cigarettes. Now what happens when you get off nicotine?

Well, your testosterone levels plummet and you gain weight, both of which the administration is for because you become more passive and easier to control.

Nicotine is one of the few remaining pleasures for ordinary people, particularly working class men, and now they’re taking it away.

As you may have heard, the FDA wants to lower the amount of nicotine in cigarettes, not remove it entirely. Carlson is reportedly a former smoker who “constantly” chews nicotine gum.