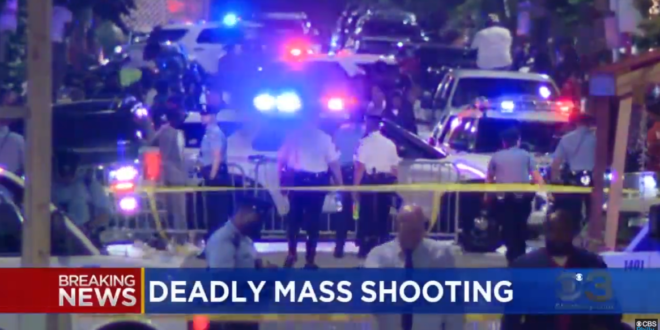 At least 14 people were shot, three of them killed, when gunmen fired into a crowd on a popular stretch of South Street in Philadelphia late Saturday night. It happened on South Street between 2nd and 3rd streets shortly before midnight.

Hundreds of people were out enjoying the night when officers said they heard multiple gunshots, then saw several gunmen firing into a crowd. An officer fired his gun at one of the shooters, Philadelphia Police Inspector D. F. Pace said.

It is not known if the suspect was struck; however, they did drop their gun and flee. South Street is a popular area in Philadelphia lined with restaurants, shops and bars. It is highly trafficked among both locals and tourists.

South Street is a popular area in the city, with restaurants, bars and clubs. Philly has been unable to pass any gun control despite increasing gun violence, due to PA’s preemptive statutes which stop municipalities from enacting tighter regulations. https://t.co/RBQcKDKZaC

Three people were killed and 11 others wounded in a mass shooting late Saturday night on South Street amid chaos that erupted on legendary blocks that have long been among the Philadelphia region’s most popular gathering places. https://t.co/1ca965cNdU