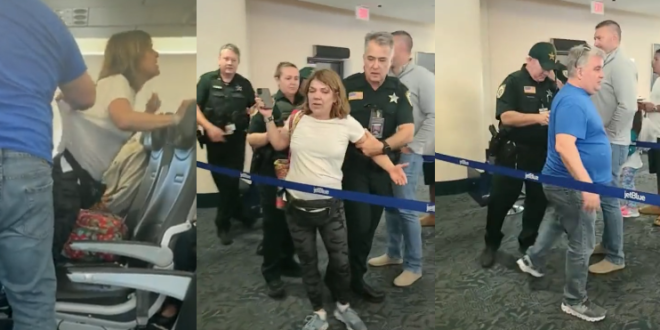 Woman Rants About Free Speech And Elon Musk As She Gets Booted Off Plane For Alleged Anti-Gay, Racist Slurs

In footage posted to TikTok, a woman delivers an inchoate rant to her fellow passengers, occasionally assisted by a man seated beside her, as all aboard settle in for their flight out of West Palm Beach.

By the time the cameras came out they’d allegedly delivered a volley of racial and homophobic slurs and been told they would have to deboard.

The woman cries “free speech is dead!,” gloats on the knowledge that her refusal to voluntarily deplane will result in the flight being delayed, then returns to muttering racist nonsense before delivering some impromptu praise for Elon Musk, “the fucking king”.

Woman rants about free speech as she and companion are made to deboard flight over racist and homophobic slurs: “Elon Musk is the f*cking king!” https://t.co/fG8simmQJl

A couple in Florida hurls homophobic slurs and refuses to get off a plane. At the end, the wife says she’s convinced it’s because they’re Trump supporters. 🤡 pic.twitter.com/AMsRykfyYL

Here’s the same obnoxious couple at the airport in West Palm Beach, FL after being removed from the plane 🤡 pic.twitter.com/dw74lhPYTn