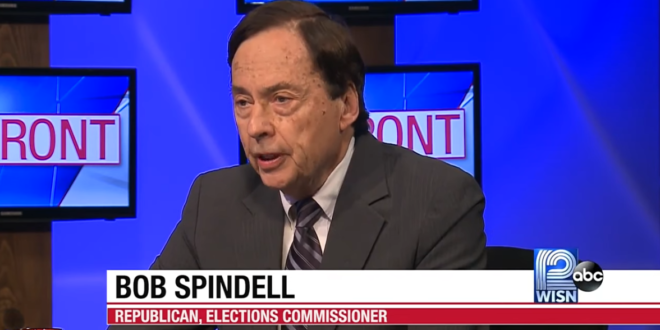 Two of Wisconsin’s presidential electors filed a sweeping lawsuit Tuesday seeking to fine 10 Republicans who posed as members of the Electoral College after Donald Trump lost to Joe Biden.

The Democrats who brought the lawsuit in Dane County Circuit Court are also seeking to punish two attorneys who worked on the effort. They want a judge to award all involved up to $200,000 apiece in damages to ensure the losing side in future elections doesn’t file official-looking paperwork with Congress claiming to be the winner.

The lawsuit appears to be the first of its kind in the country. More litigation is possible because Republicans in six other states Donald Trump lost engaged in similar behavior after the November 2020 election.

Read the full article. Among those being sued is Wisconsin Elections Commissioner Bob Spindell.

2 legitimate Wisconsin presidential electors sue slate of Trump-backed fake electors. Here is how they want a judge to act https://t.co/H9RQvauLKB