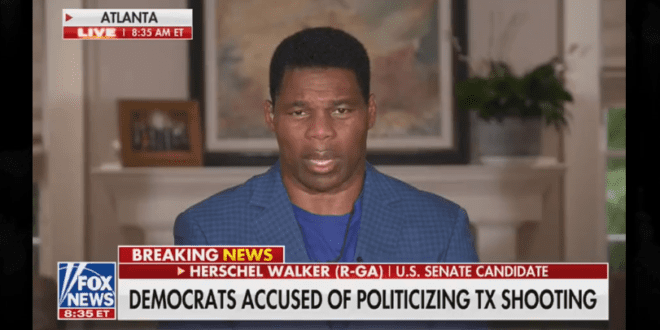 Twice in recent days Walker has fumbled questions on gun control: In one interview he seemed to suggest monitoring young people’s social media activity, and in another he dodged the question altogether. The topic is sensitive for Walker. Like many Republicans, he is an ardent champion of gun rights. But firearms have also played a big role in his own turbulent personal history.

Walker’s ex-wife, Cindy Grossman, said he repeatedly held a gun to her head and threatened to blow her “brains out.” A Dallas County judge was worried enough about the possibility of violence that in 2005 he temporarily took away Walker’s guns when he granted Grossman a restraining order. Walker has chalked up the violent episodes to a mental illness he said has now been treated.

Walker said the focus should be on the shooters, not guns, and decried “people that’s trying to score political points” by pushing for gun control legislation. “We need to get into what happened to him, why, by putting money in mental health. Have people thought about that?” Walker said.

“People see that it’s a person wielding that weapon, you know, Cain killed Abel,” Walker said. “And that’s the problem that we have. And I said, what we need to do is look into how we can stop those things.”

Asked if he believes there should be new gun laws in the wake of the Texas shooting, Georgia Senate GOP nominee Herschel Walker told me in ATL: “What I like to do is see it and everything and stuff.” He didn’t engage further. pic.twitter.com/wpsAZ7yKP5