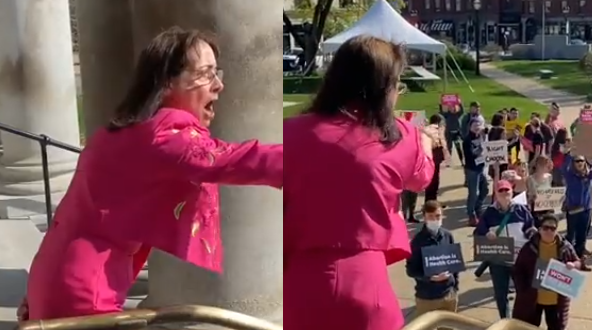 State Rep. Susan DeLemus, R-Rochester, was filmed screaming from the steps of the New Hampshire Statehouse Thursday, calling pro-abortion rights demonstrators “murderers” as well as herself.

DeLemus also shouted, “I murdered my own baby!” referring to an abortion she had decades ago and has publicly declared her regret about in the past.

DeLemus, a birther who also claims that Pope Francis is the literal anti-Christ, first appeared on JMG in 2015 when she shriekingly defended Trump’s bullshit claim that “thousands and thousands” of Muslims were seen celebrating in New Jersey streets on September 11th, 2001.

Her next appearance here came in December 2016 when she appeared on CNN to support Trump’s bullshit claim that “millions of illegals” had voted in California and that Obama had publicly told people to vote illegally.

During that CNN interview she tried to pass herself off as an everyday Trump supporter, failing to mention being a GOP state rep and Trump delegate at the 2016 GOP convention.

In 2017, DeLemus’s husband was sentenced to 87 months in federal prison for his role in the armed standoff at Bundy Ranch in Nevada. In 2016, he was chairman of Trump’s New Hampshire veterans coalition.

“Just because it’s legal, abortion doesn’t mean that I did not kill another human being, and that’s my stance,” state Rep. @SusanDeLemus said. “That was what the yelling was about. I raised my voice and tried to be loud to be heard by the chanting crowd.”
https://t.co/NNgzm8xCof

Nothing quite like the tact and grace of an @NHGOP State Rep on the steps of the people’s house. Say hello to @SusanDeLemus engaging peaceful protestors this morning. #NHPolitics pic.twitter.com/dtEW7o6dsL