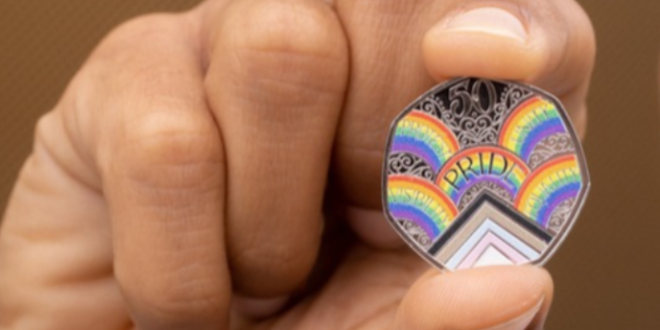 A rainbow 50p coin will be minted to mark the the 50th anniversary of the Pride movement in the UK.

The coin features Pride in London’s values of Protest, Visibility, Unity, and Equality in rainbows with the Pride progression flag. It has been designed by Dominique Holmes, an east London artist, writer, and LGBTQ+ activist.

This will be the first time the LGBTQ+ community has been celebrated on official UK coin.

It is the first time the LGBTQ+ community has been celebrated on an official UK coin. https://t.co/15at8tIwRM

We are delighted to reveal a 50p designed by East London artist, writer, and LGBTQ+ activist, Dominique Holmes celebrating 50 years since the first UK Pride event! Sign up for launch updates: https://t.co/KVtO4nb6Tf pic.twitter.com/3BQl22hrmc