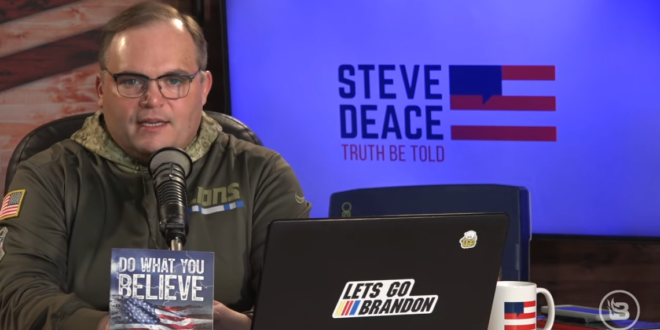 BlazeTV host Steve Deace complained Monday on Twitter that something he posted on TRUTH Social was immediately censored. Deace claimed to have posted a Truth — the platform’s term for users’ posts — only for it to be slapped with a “sensitive content” warning.

Mediaite viewed the Truth Deace had posted. It reads: “Transgenderism is a mental illness and/or a demonic deception, pass it on.” The apparent case of censorship on the platform is noteworthy, given that Trump was similarly censored on Twitter before he was banned in January of 2021.

Deace first appeared on JMG in 2011 when he denounced then-Texas Gov. Rick Perry for hiring a “practicing homosexual” as a presidential campaign strategist.

In 2015 we heard from him again when he attacked Sen. Lindsey Graham’s presidential bid, saying “voters aren’t ready for a transgendered candidate.”

Deace last appeared on JMG in 2018 when he stormed off the CNN set when another guest pointed out that “Christian sharia” is also a thing.