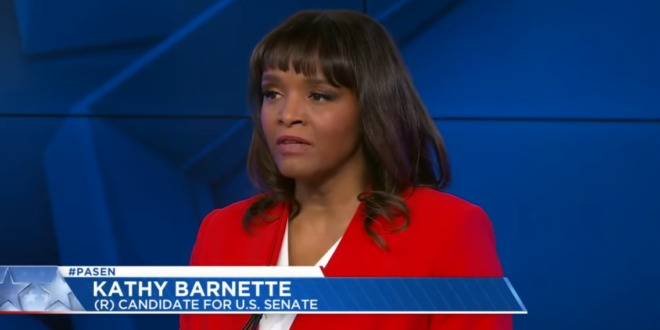 Kathy Barnette will never be able to win the General Election against the Radical Left Democrats” and raised questions over her biography — while indicating he’d still back her in a general if she does indeed clinch the GOP nomination.

She has many things in her past which have not been properly explained or vetted, but if she is able to do so, she will have a wonderful future in the Republican Party — and I will be behind her all the way.

Dr. Oz is the only one who will be able to easily defeat the Crazed, Lunatic Democrat in Pennsylvania. A vote for anyone else in the Primary is a vote against Victory in the Fall!

From 2014 to 2017, Barnette repeatedly posted on Facebook and Twitter attacking then-President Barack Obama by accusing him of being a secret Muslim and a terrorist sympathizer (also implying at one point that he was gay).

Obama did what he does best: shoving his homosexual agenda down everyone’s throat. Paraded a slew of gays before d Pope. #Pope

@WayneDupreeShow @smithkarl393 That’s the point. Many homosexuals LEAD with their sexual preference. Leave d immorality in their bedroom

A bit of a throwback photo to when I had a bit more free time to go to the range!

The Second Amendment is sacred… and no, it’s not about hunting! pic.twitter.com/iaNjc73Vnp