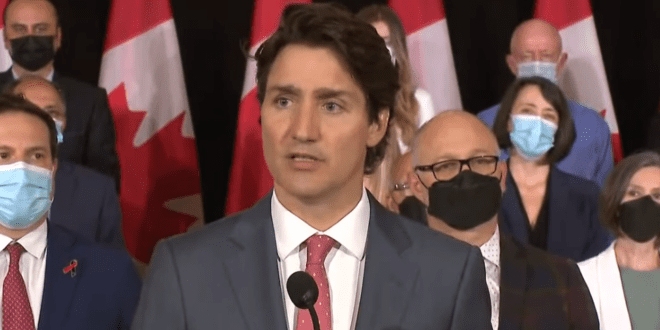 Trudeau: Canada Will Ban The Sales Of Handguns

Most owners of what Canada calls “military-style assault weapons” would be required to turn over their firearms to a government buyback program under legislation introduced on Monday, which would tighten the country’s already stringent control of firearms.

The Canadian government also announced new regulations that will ban the sale, purchase, importation or transfer of handguns. “We are capping the number of handguns in this country,” Prime Minister Justin Trudeau said on Monday.

The handgun sales ban and the proposed assault weapons law are the latest in a series of steps Mr. Trudeau has taken to restrict firearms since 22 people were killed in rural Nova Scotia by a gunman in 2020, in the deadliest rampage in the country’s history.

“What this means is that it will no longer be possible to buy, sell, transfer or import handguns anywhere in Canada,” Trudeau said in a news conference. “In other words we’re capping the market,” he added.

“Gun violence is a complex problem, but at the end of the day the math is really quite simple: The fewer the guns in our communities, the safer everyone will be,” the Prime Minister said.

The handgun freeze would contain exceptions, including for elite sport shooters, Olympic athletes and security guards. Canadians who already own handguns would be allowed to keep them.

Authorities do not expect a run on handguns in anticipation of the freeze, in part because they are so heavily regulated already, an official said in a briefing.

Canada has stronger gun legislation than the United States but while its gun homicide rate is less than one-fifth the U.S. rate it is higher than that of other rich countries and has been rising. In 2020 it was five times Australia’s rate.

Through this legislation, we’ll move forward with a national freeze on handgun ownership. In other words, it will no longer be possible to buy, sell, transfer, or import handguns anywhere in Canada once this Bill becomes law.

We’ll also increase criminal penalties to combat gun smuggling and trafficking, provide authorities with more tools to investigate firearms crimes, and criminalize the modification of magazines to prevent them from holding more than the legal limit of ammunition.

Previous CHATTER AWAY: Overnight Open Thread
Next Navarro Says FBI Served Him Subpoena At His Home