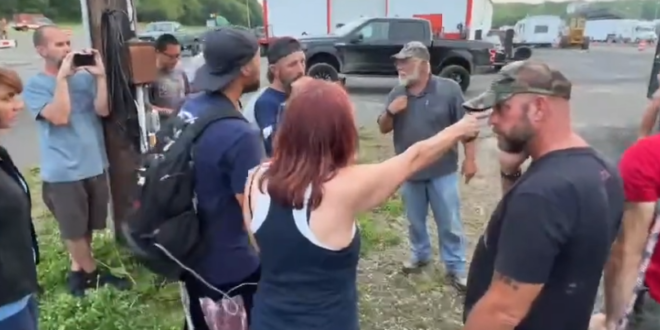 Leaders of the so-called “People’s Convoy,” surrendered and attempted to dissolve the convoy as of Friday. Yet, their own supporters weren’t pleased with that decision and tried to make their voices known to convoy leaders Ron Coleman and Marcus Summers, who hid out in a luxury RV.

After speaking with Coleman, Summers, and other co-organizers in the RV, a state trooper told angry convoy supporters that there was no financial contract with the speedway and that they would have to leave the property within hours.

“We would like to press charges,” convoy-goers yelled back, seeking to begin a legal endeavor against convoy leaders over alleged “fraud.” “Arrest them for fucking fraud,” another supporter yelled out.

“The People’s Convoy declares victory and announces its conclusion of the national convoy portion of this great movement,” the group said in a statement. “It’s been 87 amazing days!”

A live stream of the incident shows state troopers telling the truckers they need to leave the raceway because they haven’t paid to stay there.

The truckers responded by saying they paid their leaders money to be able to stay. The group eventually dispersed without incident. There was some talk online about reconvening at the local Wal-Mart.

The clip below is cued up.

“We would like to press charges,” convoy-goers yelled, seeking to begin a legal endeavor against convoy leaders over alleged “fraud.” https://t.co/xV5534i1XS