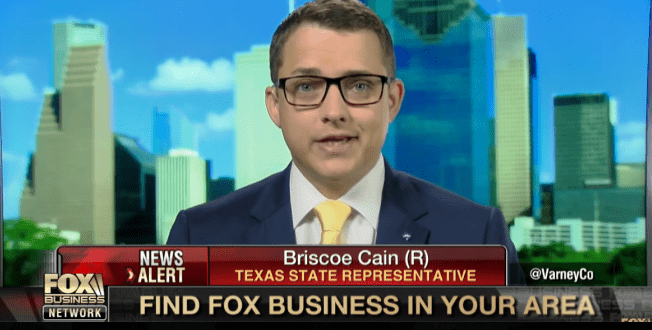 With Texas poised to automatically ban abortion if the U.S. Supreme Court overturns Roe v. Wade, some Republicans are already setting their sights on the next target to fight the procedure: businesses that say they’ll help employees get abortions outside the state.

Fourteen Republican members of the state House of Representatives have pledged to introduce bills in the coming legislative session that would bar corporations from doing business in Texas if they pay for abortions in states where the procedure is legal.

The members, led by Briscoe Cain, R-Deer Park, laid out their plans in a letter to Lyft CEO Logan Green that became public on Wednesday.

Briscoe Cain first appeared on JMG in 2019 when a Texas teacher was targeted with death threats after Cain named her as having given her class an “anti-Trump assignment.”

Later in 2019, he appeared here when Beto O’Rourke notified the FBI after Cain tweeted, “My AR is ready for you Robert Francis.” That tweet was removed by Twitter as a violation of their rules about violent threats.

With Roe v. Wade on the line, some Texas Republicans are preparing to target companies that say they’ll help employees get abortions outside the state. https://t.co/teqxYwk6S2

It’s worth noting that Briscoe Cain sneaked into last year’s Texas Democratic convention with a handgun and tried to hand out yard signs inviting shooters to attack Democrats’ houses.

This man is not well and should not be a state representative, OR own guns. https://t.co/zcJc0EEMuT