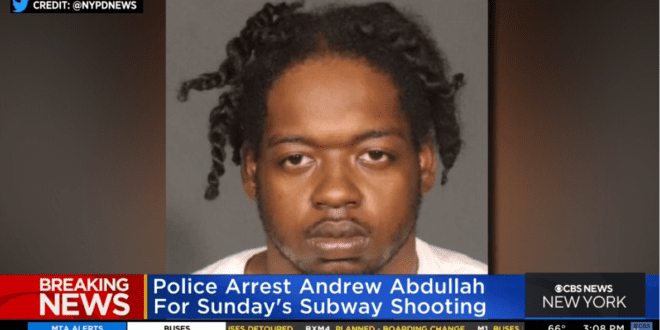 A 25-year-old man sought by New York police in the shooting death of a subway rider over the weekend surrendered at a precinct in Chinatown on Tuesday afternoon.

Andrew Abdullah had been wanted in connection with the killing of Daniel Enriquez, a passenger who was shot by a lone gunman on Sunday while riding a northbound Q train.

Mr. Abdullah turned himself in more than 72 hours after the unprovoked attack, walking into the Fifth Precinct accompanied by officers in civilian clothes. A crowd of about 50 reporters and passersby watched him walk up the steps, clad in black pants and a white T-shirt.

The shooting happened on a Q train as it traveled over the Manhattan Bridge at around 11:40 a.m., a time of day when subway cars are often filled with families, tourists and people headed to Sunday brunch.

Witnesses told police the gunman was pacing the last car of the train “and without provocation, pulled out a gun and fired it at the victim at close range,” said the NYPD’s Chief of Department, Kenneth Corey.

The 48-year-old victim died at a hospital and was later identified by police as Daniel Enriquez of Brooklyn. He was an employee of giant investment bank Goldman Sachs.

Breaking News: A 25-year-old man has surrendered to New York City police in the unprovoked fatal shooting of a subway rider in Manhattan over the weekend. https://t.co/eP57djdd5n

Andrew Abdullah, the suspect from Sunday's subway shooting, turns himself in after brokering a deal with cops through a pastor who turned up at the police precinct in a Fendi blazer and Rolls Royce.

Only in New York.