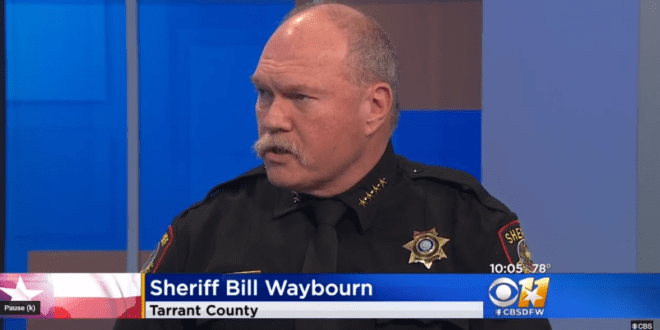 Photos of an AR-15 style rifle, the type of gun used during Tuesday’s mass school shooting in Uvalde, were reportedly shown at a Fort Worth elementary school on Wednesday during what was supposed to be a career day presentation.

According to a Fort Worth schools employee, a Tarrant County Sheriff’s Office deputy presented during a career day event on Wednesday morning at E.M. Daggett Elementary School. The presentation appeared to include pictures of AR-15 rifles, according to a photo shared with the Star-Telegram.

In the photo, an image of a poster titled “A Liberal’s Guide to the Deadly AR-15” is highlighted on Google Images. The poster describes the different components of the rifle. Also seen in the photo is a tab open to the Tarrant County Sheriff’s Office’s website.

The sheriff of Tarrant County, you may recall, sparked outrage in 2019 when he called undocumented migrants “drunks who will run over your children” during a press event at the Trump White House.

During “career day” at a Fort Worth elementary school one day after 21 people were slaughtered in their classroom, a Tarrant County Sheriff’s Office deputy gave a presentation on AR-15s that included a diagram called “A Liberal’s Guide to the Deadly AR-15.”https://t.co/KO5MnIxcCv

A deputy from the Tarrant County Sheriff’s Office gave a presentation to students that at some point included a photo of a poster titled “A Liberal’s Guide to the Deadly AR-15,” which detailed the different parts of the riflehttps://t.co/8JepwpjLEM