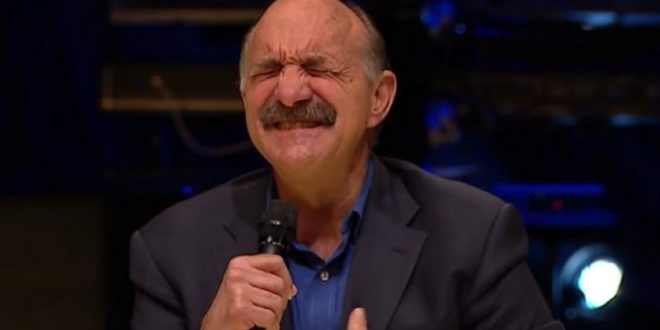 Scamvangelist: Jesus Told Me To Bind The Supreme Court From The Witches Trying To Change Their Minds

“The Lord spoke to me, ‘You’re always binding the devil, but I want you to bind five Judges into a coalition of conscience with chains that cannot be broken.’

“The Lord said, ‘I want you to mobilize prayer to bind five Judges on the Supreme Court into a coalition of conscience that no threats or witchcraft will break.’

“I want to call people to bind these five Judges. Bind them into a coalition of conscience that will last over the next two months.

“No death threats. No witchcraft will cause them to change. I believe we’re going to enter into a revival similar to the days of the Civil War where God poured out His Spirit.

“I believe we’re in a civil war again in the states. I’m starting with Colorado, which means the color red — that God would make Colorado a red state by the blood of Jesus.” – Scamvangelist Lou Engle.

Engle last appeared on JMG in March 2022 when he launched a nationwide prayer fast that would stop people from being LGBTQ.

In March 2020 we heard from him when he launched a fast for God to “stretch out his rod of authority” and “rebuke” the coronavirus.

In August 2018, Engle launched a three-day fast to stop witches from blocking Brett Kavanaugh’s confirmation hearing before the Senate.

And in 2017, Engle launched a three-day “Esther fast” to stop witches from cursing Donald Trump.

Engle first appeared on JMG in 2012 when he declared that abortions cause tornadoes and that his prayers caused the passage of California’s Proposition 8.

“I want to call people to bind these five judges; bind them into a coalition of conscience that will last over the next two months.” https://t.co/q8nvOVwcfi#Charismamag #charismamedia #LouEngle #SeanFeucht #propheticdream #RoevWade