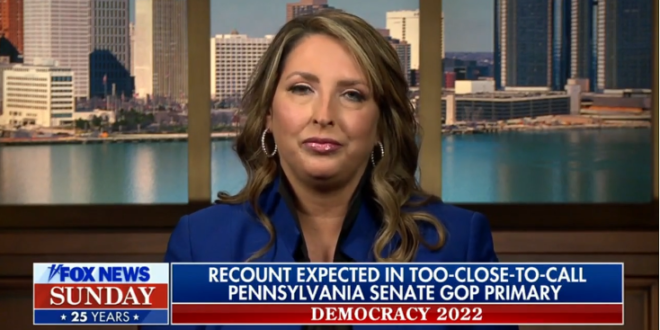 “Dr. Oz should declare victory,” Trump said. “It makes it much harder for them to cheat with the ballots that they ‘just happened to find.’”

On Fox News Sunday, MacCallum asked McDaniel whether she agreed Oz should simply declare himself winner of the race. McDaniel dodged the question, but said Trump is “right” about problems with voting in Pennsylvania, which she described as a “disaster.”

McDaniel on Sunday said she doesn’t “know what Dark MAGA is” in response to a question about a statement by Rep. Madison Cawthorn (R-N.C.) about what he says is the rise of a new far right-wing political faction.

McDaniel told “Fox News Sunday” that Cawthorn’s “Dark MAGA” comments reminded her of a popular science fiction film franchise. “I don’t know what Dark MAGA is,” she said. “It sounds like a Star Wars thing, like the dark side of the force.”

“Madison had some issues that came out, he was a rising star in our party,” she said, “but Madison did the right thing in conceding.”

“The former president is suggesting that another Republican, who is supported by people who used to work in his administration, is searching for votes?”https://t.co/QurnlRrJwv