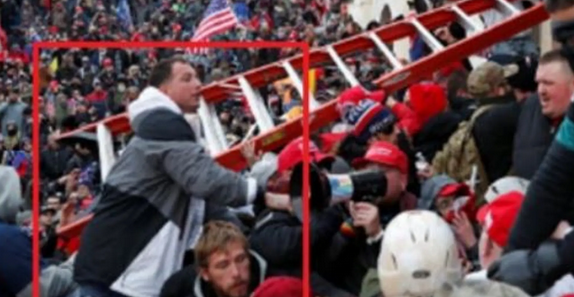 A Carlsbad man pleaded guilty Friday to assaulting multiple police officers during the Jan. 6, 2021, insurrection at the U.S. Capitol.

James Burton McGrew, 40, admitted to joining in a mob of people who overtook police officers guarding the Capitol, then later attacking officers during a series of altercations. He is set to be sentenced in August when he faces a maximum of eight years in prison for his plea to a count of assaulting, resisting, or impeding officers.

According to the U.S. Attorney’s Office, McGrew and other rioters advanced to the Upper West Terrace doors to the Capitol building, where he filmed himself shouting “Let’s go,” and “We took this thing.” After entering the building, prosecutors say he pushed one officer and struck another.

He entered the building at around 2:45 p.m. and made his way to the Capitol Rotunda, where he saw police officers trying to corral rioters toward the exit. After witnessing rioters fight with both Capitol Police and Metropolitan Police officers, McGrew yelled at the officers. “You leave!” he admitted to shouting at them. “This is our house!”

Then, as officers tried to clear the Rotunda, McGrew grabbed a police officer’s baton, wresting it away from the officer briefly before returning it. He shouted to other people in the crowd to lock arms and form a line in order to resist the officers’ efforts to clear the building.

After watching other rioters physically assault officers who were defending the tunnel, McGrew grabbed a piece of a wooden handrail, lifted it over his head, and threw it at the police officers, striking either an officer or the officer’s shield.

Jan 6 GUILTY PLEA: James Burton McGrew admits to yelling “We took this thing” outside the Capitol before physically engaging with officers both inside and outside, including throwing a handrail toward officers intending to cause bodily injury. pic.twitter.com/fKyAevrrwj

James Burton McGrew left a California sober home and crossed the border while the FBI searched the nation for him, according to new court documents https://t.co/bmIWMm5n3s

James Burton McGrew who lifted his shirt during the Capitol riot has been arrested after investigators identified his distinctive “KING JAMES” belly tattoo, which happened to match an old police booking photo. https://t.co/ryAoeVc3S9

This is the belly of insurrectionist James Burton McGrew. He fled to Mexico before the FBI could arrest him.
What the hell does that say?https://t.co/q9Xsqwald4 pic.twitter.com/FZJWZAc0JY