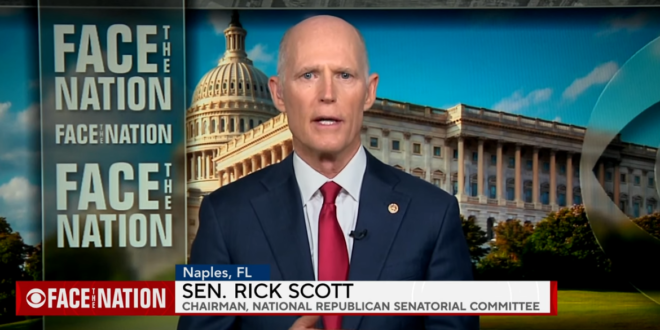 U.S. Sen. Rick Scott returned to network television Sunday with an interview on CBS’s “Face the Nation,” where he illustrated the difficulty Republicans have with Donald Trump‘s election narrative. Asked about the penchant for “relitigating” the 2020 presidential election by host Margaret Brennan, Scott acknowledged that it’s a live issue for many Republicans.

Brennan asked Scott directly about whether Joe Biden is the “duly elected President,” and drawing a deep breath of hesitation, Scott nodded and said, “absolutely.” Scott, the chairman of the National Republican Senatorial Committee, was among the Republicans who challenged the election results in Pennsylvania, a state carried by Biden in 2020.

Sen. Rick Scott (R-FL) suggested that “racial politics” and government forms could be to blame for white supremacy in the United States.

“In the plan I put out at rescueamerica.com, I said we ought to stop asking people on government forms for their skin color,” he opined. “We ought to judge people by their character, not their skin color. So we’ve got to figure out how to bring people together.”

The latest: “They want to know what happened. Why it happened.”@SenRickScott says Republicans ‘still want the facts to come out’ about 2020 Election

Asked repeatedly if he thinks it’s important for Republicans to condemn white nationalism, Rick Scott dodges the question, but says “we have to stop all this racial politics” pic.twitter.com/n4sgi80zaj

“There’s clearly people that are still concerned about what happened in 2020, and they would like the facts to come out … we’re gonna make sure their vote is not diluted” — Rick Scott is on CBS playing footsie with the big lie pic.twitter.com/ZV4afZJLbX

When asked by @margbrennan whether he’d advise every GOP Senate candidate to “condemn white nationalism”.. Sen Rick Scott ( R-FL) says “I tell people what I believe. Every Senate candidate on both sides is going to decide what’s important to them…” pic.twitter.com/C3RalX2GVT