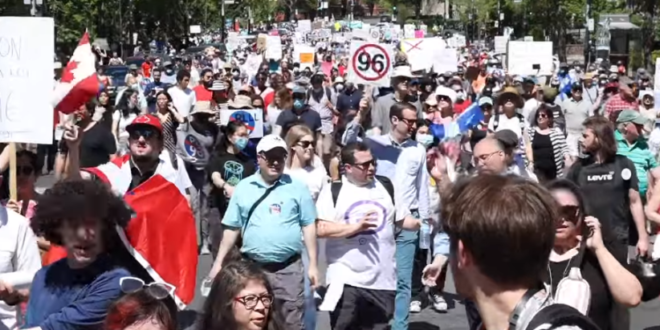 The streets of downtown Montreal were flooded with protesters on Saturday as many gathered against Bill 96, the Quebec government’s proposed law to reform its Charter of the French language. Organized by groups that represent the province’s English-speaking community, the protest sought to send a strong message to the majority government that the legislation as it stands is unacceptable.

Bill 96 is in the final stages of passing and is expected to come to a vote in the National Assembly later this month. It would make several changes to the 1977 Charter of the French Language. Among the proposed changes to the charter include requiring new arrivals to Quebec to receive government services exclusively in French after six months in the province — which many have called an unrealistic timeline to learn a new language.

It also seeks to limit the use of English in the courts and public services, grant powers of search and seizure without a warrant to Quebec’s language regulator and cap enrollment at English junior colleges, where students would have to take more courses in French.

Russell Copeman, executive director of the Quebec English School Boards Association, says he supports efforts to promote and protect the French language, but describes Bill 96 as “discriminatory” and the cause of “frustration and anxiety” among anglophones and francophone business leaders.

A minister responsible for the French language would be in charge of ensuring compliance with the law. Among the minister’s powers would be to withhold grants or subsidies promised to municipalities if there is a suspicion they have not complied with the French-language charter.

Business contracts must be drawn up in French, and if there are versions of a contract in two languages, the French will take priority if there is a discrepancy. A company’s pleadings in court will have to be in French, or translated into French. All judgments in court will be in French or translated into French, and judges will no longer need to be bilingual.

Services to the public must be provided in French, and employees must not be required to speak English unless a company has demonstrated that it is essential for an employee’s job, and that the company has done all it can to avoid a requirement to speak a language other than French.

With limited exceptions, Bill 96 requires doctors to address their patients in French, even in situations where both doctor and patient would better understand each other in another language. Certain bilingual institutions, such as the Jewish General Hospital, are exempt.

If a doctor violates the tenets of Bill 96, all it takes is an anonymous complaint to the Office québécois de la langue française for investigators to enter their office and start seizing records without a warrant, including confidential medical documents.

The bill mandates “francisation” of any company with more than 25 employees, which means that the companies will need to obtain government certification that they predominantly function in French.