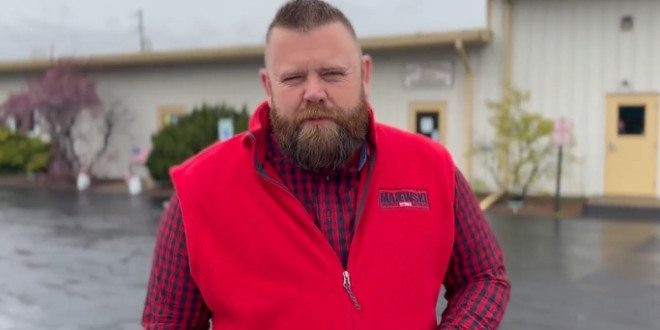 J.R. Majewski, the Air Force veteran who won the GOP primary for Ohio’s new 9th Congressional District, was a January 6 rally participant and has repeatedly shared pro-QAnon material — including a video showing him painting his lawn to say Trump 2020 with “Q” replacing the zeros.

In April 2021, Majewski denied supporting QAnon in an interview with the Toledo Blade, saying, “I’ve never read any QAnon drop — what they call the ‘Q-Drop.” A “Q-drop” refers to messages posted by the anonymous “Q” who originally fed the conspiracy theory.

Despite claiming not to follow Q’s updates, Majewski engaged with QAnon hashtags, memes and rhetoric frequently online prior to this interview. On his now-deleted personal Twitter account, Majewski tweeted the QAnon hashtag #WWG1WGA — which stands for “Where we go one, we go all” — more than 50 times.

Read the full article. His rap video is the last clip below.

Tweets, some since removed show Majewski throughout the day in various places outside the Capitol — including a video in which a member of the group leads them in repeating the slogan of QAnon.https://t.co/mBa6Z4W8EO pic.twitter.com/klkzYVPiiY

@Jim_Jordan @realDonaldTrump
BAY TOWNSHIP, Ohio Bay Township resident has taken it a step further by turning his entire front lawn into a massive banner for President Donald Trump. It took J.R. Majewski about 120 gallons of paint to create the 19,000-square-foot banner… pic.twitter.com/agbhTttF1R

It appears “Stop the Steal” rally attendee J.R. Majewski (R) is on the verge of upsetting two GOP legislators for the right to take on 40-year Rep. Marcy Kaptur (D) in #OH09, which GOP mapmakers redrew from Biden +19 to Trump +3. @CookPolitical fall rating: Toss Up.

OH congressional candidate JR Majewski is complaining about how much it costs to fill up his ‘freedom mobile.’ pic.twitter.com/qKcXNhGa84

Previous Putin To Troops: The West Was Planning To Invade Us
Next Riot Committee Mulls Summoning Trump And Pence