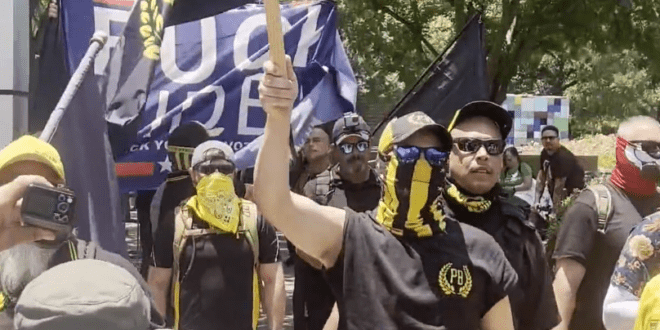 Local law enforcement was called in to break up a confrontation between gun control advocates and those attending protesting outside the NRA Convention in Houston – with a group of far-right Proud Boys joining in the fight.

Hundreds of people calling for gun control following the massacre at Robb Elementary School in Uvalde, Texas gathered outside the George R. Brown Convention Center on Saturday for the second day of the NRA Convention.

In response, a group of about 20 members of the far-right Proud Boy group appeared as counter-protesters and hurled anti-gay slurs at the nearly 200 protesters.

Security guards blocked a small group of the far-right organization from entering the security perimeter around the George R. Brown Convention Center in Houston where the NRA is holding its annual meeting.

The security agents told The Washington Times that NRA officials directed them not to allow Proud Boys through the gate. The scene at the gate had become chaotic with NRA members, who were wearing credentials, exchanging taunts with gun-control protesters gathered across the street.

Another view of the Proud Boys outside of the NRA convention this afternoon using homophobic slurs in an attempt to provoke pro gun control protesters.

Some people need to call their dads, uncles, or brothers, and tell them to go home. pic.twitter.com/wU95nONyRL

Protesters chanting “shame on you” as attendees walked into the GRB for the annual NRA Convention in Houston. Dozens of law enforcement stepped in to separate the crowd when the far-right org the Proud Boys showed up to protest the protesters. pic.twitter.com/necjlrvVsN

Protests continue in front of the #NRA convention in Houston, Tx. Proud Boys have arrived and separated from the protestors by a barricade and several state troopers. pic.twitter.com/weoYQ10BVS

Proud Boys march through Discovery Green as they look for a place to demonstrate outside the NRA Convention Saturday. The group was demonstrating against the anti-NRA protesters 100 yards away. pic.twitter.com/XyoFLYXev6