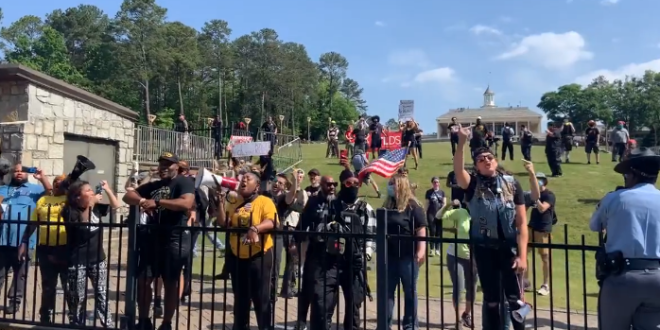 About 200 members of the Sons of Confederate Veterans gathered at Stone Mountain on Saturday for an observation of Confederate Memorial Day, despite calls for the state-owned park to shut them down.

Instead, a little more than 100 counter protesters descended down the wide lawn in front of the mountain’s gigantic bas relief carving of Confederate leaders, shouting and jeering, forcing the SCV speakers to struggle to be heard over the din.

“These protesters are against our Christian faith. They are anti-Christ,” SCV member Kenneth Buggay said in a fiery closing prayer shouted over a chorus of boos from the counter protesters about 50 yards away. “We have been fighting this war since 1861. We will be victorious.”

JUST IN: According to the Sons of Confederate Veterans newsletter, “entertainment” for their Saturday event at Stone Mountain Park will be by “Jubilee”.

This is the musical act of the Buggay family in GA, who have deep ties to the “Christian Identity” white supremacist religion. pic.twitter.com/OwKKe6xVqd

Both sides staying divided at ceremony at base of Stone Mountain with heavy security presence by about a dozen state troopers pic.twitter.com/zrW9YDR1eZ

The True Southron™ folks who came out to Stone Mountain today absolutely know its history but — I’m being charitable here — aren’t put off by it enough to disassociate themselves from it. 3/3 pic.twitter.com/kj6PD0YCXh

“We are winners” counterprotestors chant upon arriving at the Sons of Confederate Veterans Memorial Day celebration at Stone Mountain Park. pic.twitter.com/NH6Lj3jK2f

Previous Pelosi Holds Surprise Meeting With Zelensky In Kyiv
Next Fox Host: Biden Is Wrong, We’re Not All Vaccinated