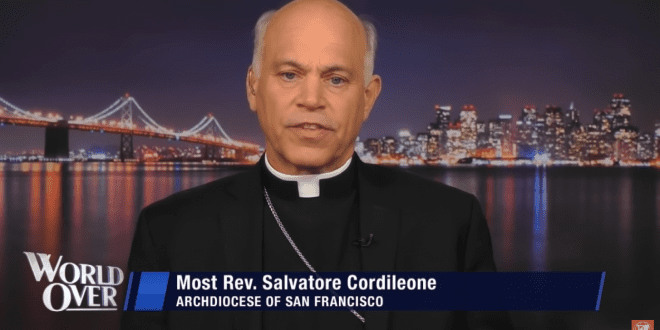 Bishop Robert McElroy of San Diego, one of Pope Francis’ ideological allies who has often sparred with more conservative U.S. bishops, was named by the pope on Sunday as one of 21 new cardinals.

Among his notable stances, McElroy, 68, has been one of a minority of U.S. bishops harshly criticizing the campaign to exclude Catholic politicians who support abortion rights from Communion. “It will bring tremendously destructive consequences,” McElroy wrote in May 2021. “The Eucharist is being weaponized and deployed as a tool in political warfare. This must not happen.”

In selecting McElroy, Francis passed over the higher-ranking archbishop of San Francisco, Salvatore Cordileone. Earlier this month, Cordileone said he would no longer allow House Speaker Nancy Pelosi to receive Communion because of her support for abortion rights.

As I’ve reported on multiple occasions, Cordileone is arguably the most anti-LGBTQ of US archbishops and is considered the “father” of California’s Proposition 8, which successfully overturned same-sex marriage in 2008. Many had predicted that his attack on Pelosi would cost him his red hat.

The Bishop of San Diego, Robert Walter McElroy, has been created a Cardinal by Pope Francis. This will no doubt be interpreted as a rebuke of Archbishop Cordileone, as McElroy has been very vocal in his opposition to denying Holy Communion to pro-abort ‘Catholic’ politicians.