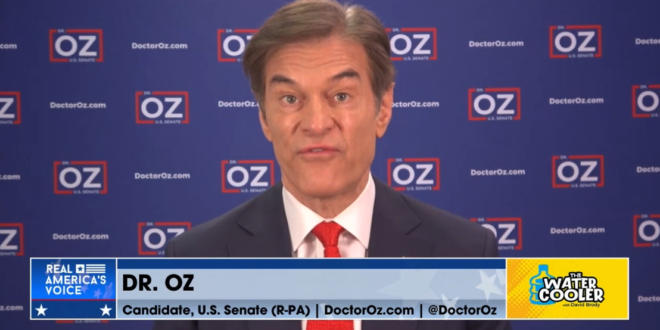 Oz did not take the bait on 2000 Mules, saying his wife has told him to watch the film, but he hasn’t seen it. The Senate hopeful then pivoted to the election, but stopped short of actually calling the results fraudulent.

Oz cited issues he has with the 2020 election, but when Brody asked whether he believes the election was “rigged” or “stolen,” as Trump often says, Oz refused to use such definitive language. Oz claimed he’s heard from voters who say “their votes weren’t counted.”

Read the full article. This is all contrary to his previous claims. Rather obviously, Oz thinks he’s got tomorrow in the bag and he’s now edging back to the center.

NEW: My interview with Dr. Oz is out. He tells me he has not seen 2000 Mules and when I asked him whether the election was rigged or stolen he says, “I want to be careful.”pic.twitter.com/O8P60fdx8g Full interview here: https://t.co/NLDylPYa1M @RealAmVoice #2000Mules

NEW: Dr. Oz says the child transgender movement is based on, “false science” but says the doctor and patient must decide the road forward. He doesn’t call for a ban on puberty blockers. pic.twitter.com/sMFYcNNshn @RealAmVoice