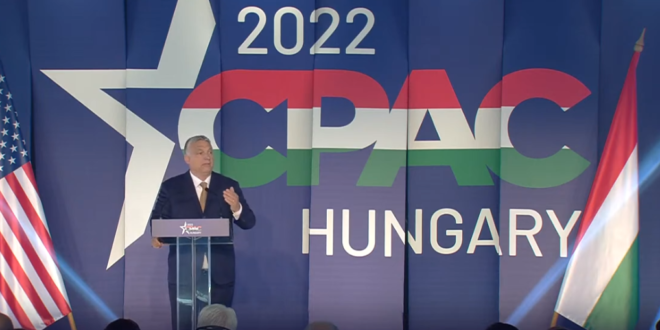 The Hungarian leader, Viktor Orbán, has told a conference of US conservatives that the path to power required having their own media outlets, calling for shows like Tucker Carlson’s to be broadcast “24/7”.

Orbán, recently elected to a fourth term, laid out a 12-point blueprint to achieving and consolidating power to a special meeting of the CPAC, under the slogan of “God, Homeland, Family”, held in Budapest.

“Of course, the GOP has its media allies but they can’t compete with the mainstream liberal media. My friend, Tucker Carlson is the only one who puts himself out there,” he said. “His show is the most popular. What does it mean? It means programs like his should be broadcasted day and night. Or as you say 24/7.”

“We have to take back the institutions in Washington and Brussels. We must find allies in one another and coordinate the movements of our troops.” @floragaramvolgy reports on Orbán’s alarming speech to the Republicans at CPAC Hungary. Via @guardian. https://t.co/simSIBfsIj

There is no more blaring, red siren alarm indicator of the @GOP’s self-declaration of being an authoritarian, fascist group than having their @CPAC conference in Hungary where authoritarian leader, Viktor Orban is their archetype for @GovRonDeSantis 2024.👇🏼https://t.co/CahklXMxsE

There is no greater indicator of the GOP’s threat to democracy than the fact that they are currently holding CPAC in the autocratic nation of Hungary with Viktor Orbán.

⁦@mschlapp⁩ and ⁦@CPAC⁩ are embracing this. They are endorsing it. This CPAC meeting in Budapest is an anti American abomination and should be covered like a Bund meeting in 1938. https://t.co/EMDaXS8hyn

What’s Republican Congressman Mario Diaz-Balart up to this weekend? He is in Hungary for CPAC, speaking in the same stage with authoritarian Viktor Orban. When frauds like Diaz-Balart pretend to care about democracy, remember that their concerns are always very selective. pic.twitter.com/TtDcJV8yAZ

Steve Schmidt’s outrage at both CPAC’s choice to hold an event effectively celebrating the racist authoritarianism of Viktor Orban and also at the general indifference of the public to the growing menace of the global anti-democracy ethnonationalist right is…entirely justified. https://t.co/yDwzkHbFFx

On the eve of the CPAC meeting in Budapest, Viktor Orban reaffirms his commitment to the “Great Replacement” conspiracy theory that inspired the Buffalo mass murdererhttps://t.co/ktAAV1p4kZ