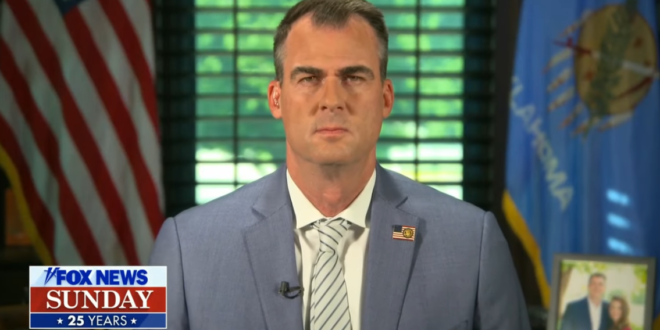 Oklahoma Gov. Kevin Stitt on Sunday acknowledged concerns that his state’s strict new law on abortion could be circumvented on tribal lands within the state. Stitt was discussing that new law in the context of a 2020 Supreme Court ruling, McGirt v. Oklahoma, that held that crimes committed on tribal lands cannot be prosecuted by state or local law enforcement, only in tribal courts or federal courts.

“You know, the tribes in Oklahoma are super liberal,” he said. “They go to Washington, D.C. They talk to President [Joe] Biden at the White House; they kind of adopt those strategies. So yeah, we think that there’s a possibility that some tribes may try to set up abortion on demand. They think that you can be 1/1,000th tribal member and not have to follow the state law. And so that’s something that we’re watching.”

Read the full article. Roughly half of Oklahoma is under the jurisdiction of local tribes.

“Oklahomans will not think very well that if the tribes try to start up abortion clinics — abortion on demand — in eastern Oklahoma because the expansion of tribal lands includes the city of Tulsa,” said Gov. Kevin Stitt, R-Okla. https://t.co/wiA9otKzcj pic.twitter.com/u38bsNkTvH

Previous Extremist Rep. Paul Gosar: “Ukraine Is Not Our Ally And Russia Is Not Our Enemy, None Of This Is Putin’s Fault”
Next John Fetterman Suffers Stroke, “Feeling Much Better”