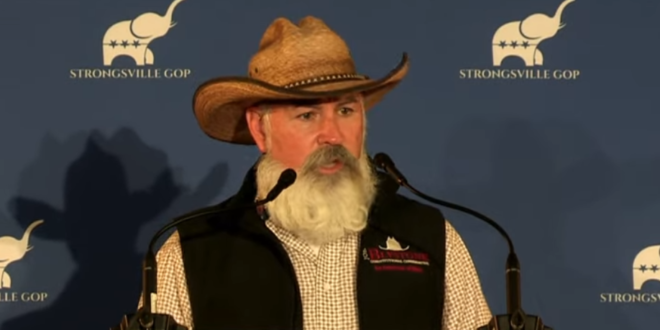 A candidate challenging Ohio’s incumbent governor in a Republican primary shared a photo of himself in front of a sign depicting an image of syringes arranged as a swastika — the chosen symbol of Nazi Germany as it waged a systematic slaughter of millions of Jews and others in Europe.

Joe Blystone, a cattle farmer often seen campaigning in a cowboy hat and bushy beard, posted a photo Friday on his campaign’s Twitter account. It shows him standing in front of a banner for a local of the International Brotherhood of Boilermakers.

Behind him, a man holds a sign reading “NO JAB NO JOB” — presumably a statement in opposition to employers requiring vaccination as a term of employment.

Read the full article. Blystone last appeared on JMG in March when he and Gov. Mike DeWine appeared to nearly come to blows at the state fairgrounds.

Actions not words!
What were my opponents doing the last two years?
Were they fighting shoulder to shoulder with the people?
NOPE!
Action not empty promises!
May 3rd you will decide tyranny or FREEDOM! pic.twitter.com/iqneG3TfYm