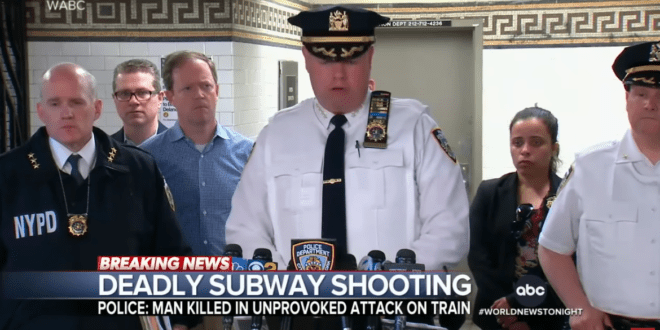 Police are looking to question a Brooklyn man with a lengthy rap sheet in connection to the unprovoked, broad-daylight shooting death of a subway rider on the Manhattan Bridge, law enforcement sources told The Post Monday — as cops released surveillance images of the suspect in the deadly incident.

The sources said they were looking to talk to Andrew Abdullah, who has 19 prior arrests, in connection to the cold-blooded killing of a man headed to brunch in Manhattan on the Q train around 11:40 a.m. Sunday.

He was still on the loose Monday afternoon. Police Commissioner Keechant Sewell earlier tweeted video of the suspect — wearing a dark jacket, white mask and light-colored pants — in the slaying of 48-year-old Daniel Enriquez.

The Goldman Sachs researcher shot dead on a Manhattan subway in a totally random attack was heading to brunch with his brother — and only took the train because Uber prices had spiked, the victim’s partner said Monday.

“On the weekends he never took the subway,” Adam Pollack, 54, said of his senselessly slain partner Daniel Enriquez.

“He only recently, like in the last couple weeks, decided, ‘Oh the Uber surge pricing was like ridiculous.’ And I didn’t want to fight with him about it. So I was like, ‘Okay, you can take the subway.’”

As the Q train rumbled across the East River on a sunny Sunday morning, with a view of the Lower Manhattan skyline shimmering through the windows, a man paced up and down the aisle of the last car.

Dmitry Glivinskiy, a vocal coach who was sitting at the back of the car with headphones on, heard what he thought was a firecracker going off. He looked up and saw the man standing in the middle of the car, holding a gun.

The gunman had fired one shot — without provocation — striking Daniel Enriquez, 48, in the chest and killing him, the police later said. The Q train attack comes after the mass shooting last month on the N train that left at least 23 people injured and the shoving death of a woman in the Times Square station in January.

Mayor Eric Adams, speaking to the family of the man who was killed on the subway this weekend: “It is my responsibility to keep New Yorkers safe. My heart goes out to that family. I’m sorry they lost their loved one… I thank god I’m the mayor right now.”

An absolutely devastating tragedy.
My heart goes out to the loved ones of Daniel Enriquez, who was shot today while riding the subway.

Enough is enough. We must do more across the country to counter gun violence and bring an end to this epidemic.https://t.co/HyzsDI1xDA