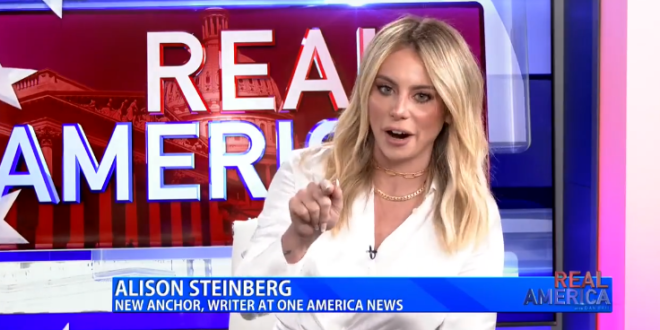 “If you open the dictionary to ‘virtue signaling’ you would see that image right there. That is just ridiculous on so many levels. And, I mean, I don’t know what Ukraine has to do with sexuality.

“If the LGBTQ+ crew is trying to indicate that supporting Ukraine is gay, I might be in agreement with them there. Just kidding! Just kidding!

Steinberg was responding to co-host Dan Ball’s assertion that it’s hypocritical for gays to support Ukraine because same-sex marriage is “illegal in the entire country.”

Before she was hired by OAN, Steinberg became a darling to the far-right for stalking “communist” businesses that enforced pandemic protocols.

Context: This is the image they were criticizing. pic.twitter.com/Hc30qGlEOU