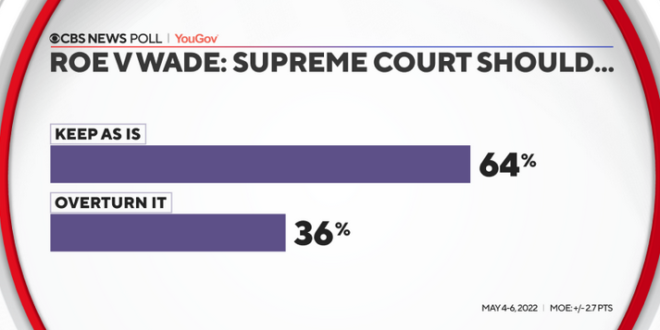 Most people who support upholding Roe v. Wade view its possible overturn as a danger to women, and think that development would put other rights in jeopardy, a CBS News poll out Sunday indicates.

Almost two-thirds (64%) of respondents believe the Supreme Court should uphold Roe v. Wade, per the poll — of those, 82% believe overturning it would “be a danger to women” and “be dangerous for Americans’ rights.”

Those respondents said they feel discouraged, angry and scared. Sixty-six percent of women under age 50 said they think overturning Roe will lead to more restrictions on birth control.

POLL: 82% of people who say SCOTUS should uphold Roe v. Wade believe its reversal would be “a danger to women” and “dangerous for Americans’ rights.” https://t.co/g6JyuoXWT8